Return of the Serial

Steampunk Canada member Mark Fenger is taking something old and making it new again.  He's not just another author publishing yet another steampunk story, he is using his blog to bring back the serial style adventure.

Each week at his website Brass Bolts you can read Orphans of The Celestial Sea. The story revolves around a group of young people trying to survive on their own in a world of  creeping sentient mist that turns ordinary people into crazed murderers.  They take control of a mysterious abandoned airship and pick up new members of the crew along the way. Each crew member has their own history and they are well developed throughout the story.   There is even a trip to Atlantis, and it is definitely not what you are thinking.

I asked author Mark Fenger a few questions to find out a little more about him and his work:

My brother is an avid comic collector, and I happened to visit his house just after Girl Genius #4 came out. I read the first issues through and was really impressed with the aesthetic and the possibilities inherent in the new genre. I wasn't writing at the time however, and my interest never kindled at a deeper level. Then after I had written my first novel, I was looking around for ideas on where to go next and a bottle of nasal spray intervened. I found it amusing that the French side read 'Jet Fort', it made me think of flying fortresses and cities in the sky, and somehow it all clicked that this was meant to be a Steampunk story, which is how I came to Aetherstorm, my second novel and the beginning of my deeper interest in Steampunk.

What inspired you to write "Orphans of the Celestial Sea"?

After various misadventures in the publishing world, including finding, and firing my first agent, I found my mind needed a break from long-form writing. I had just recently discovered the television series Firefly, after missing the initial run, and it seemed to me that the core idea of Firefly, in Joss Whedon's words "nine people looking into the blackness of space and seeing nine different things", was a perfect fit to a Steampunk world. Hopefully it also gives a little more life to an all too short-lived series.

Can you tell us a little about the other steampunk writing projects you have in the works?

My next novel is a sort of ghost in the machine, dystopian industrial-revolution setting (I know IR is inherently dystopian, in this case it's even more so). It's about a young man who falls from the pinnacle of society into the deepest of gutters, and finds that the world and values he grew up believing in were merely the rationalizations of those on top for maintaining the status quo. That's on hold right now until summer, because I don't have the time to commit to it fully right now. In the meantime I've been working up a variety of short stories in the Steampunk and light Science Fiction genres, the latest of which is a Paranormal, Science Fiction, Neo-Noir Mystery (I have trouble sticking to just one genre).

Orphans of the Celestial Sea is very much worth your time to read.  It is currently ongoing and FREE for all to enjoy! 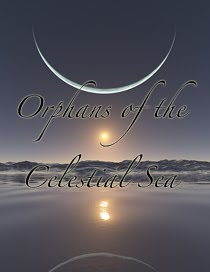