Review: The Adventure of the Ring of Stones 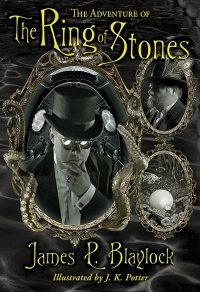 The Adventure of the Ring of Stones

Blaylock – one of the original trio whose work K.W. Jeter in 1987 coined the word "steampunk" to describe – said in an interview that “No author's writing more influenced my own than that of Robert Louis Stevenson”. Blaylock’s Adventure of the Ring of Stones certainly fits in with this Stevensonian tradition being, like Treasure Island, a seafaring adventure to find a priceless prize – an unusual one in this case – in the Caribbean, only at a later point in history than Long John Silver’s: in the era of steam yachts.

Fans of Blaylock will recognize and savour his trademark whimsy, such as the setting where the characters foregather in chapter one, The Half Toad Inn, renowned for its Old Man Newt ale – another parallel with Treasure Island, which began in The Admiral Benbow Inn. As one of their number lays before them the tale of the treasure and the challenge to find it, they enjoy one of the mouth-watering repasts with which Blaylock unstintingly delights his characters (and readers): pheasants roasting on spits over the open fire, salmon fritters, green beans and butter sauce, roast potatoes, sausages, burgundy, and a flaming pudding to follow.

While nominally a Langdon St Ives story, he is largely in the background in this tale, which is narrated by his friend Jack Owlesby, another recurring character. Tubby Frobisher and his wealthy uncle Gilbert provide the driving force behind the expedition, and the story, roping the others in for the trip to the Caribbean after they discover an old account of the treasure written in 1843. But a villain wants the treasure too, and his henchmen dog the heroes from London to the tropics, starting with thugs in alleys, then mutineers, and pursuit at sea. One of the crowning action sequences of the book is when a colossal octopus goes on a rather King Kong-like rampage in London, vexed by the navy’s airships instead of the biplanes of the classic 1933 film.

Sadly, as in Treasure Island, you won’t find any ladies taking part in the adventure, not unless you count the giant cephalopod who is a member of the gentler sex – assuming that that phrase can be applied to a ravening sea monster that has a tendency to tear off men’s heads with its tentacles. In a way, their absence sums up the difference between The Adventure of the Ring of Stones and most steampunk writing today: it makes little pretence of refashioning history to suit today’s sensibilities and issues. Rather, it is more of an homage to the adventure tales of the Victorian era that were the inspiration for contemporary steampunk writing.

A limited edition of 1000 hardcover copies, each one numbered and signed by the author, The Adventure of the Ring of Stones will sell out before long, so if you wish to add it to your collection you’re advised to do so with dispatch. E-book editions for Nook and Kindle are currently only available in the USA, but I’m told that eventually they will be for sale out in the wide world too. The hardcover, at least at Amazon, sells for $25 in the US, £17.60 in the UK, and $37.50 in Canada, so the most economical way for Canadians to lay hands on a copy is likely to order it from The Book Depository, where I got mine, for the very reasonable price of $28.50, delivery included. Local book shops may be able to obtain copies from American distributors.

Sample pages of the book can be read at the Barnes & Noble website.

If The Adventure of the Ring of Stones is beyond your budget, or if you want to poke about the roots of modern steampunk, you need poke no further than Blaylock’s early work in the field, the Langdon St Ives novels Homunculus and Lord Kelvin’s Machine, both of which have lately been re-issued in very reasonably-priced paperback editions as well as in e-book and audio book formats. Likewise, The Aylesford Skull.

Paul Marlowe’s steampunk tendencies began to manifest themselves a couple of years before the word was coined, when he got his first pocket watch. From there, things whirled out of control with sealing wax, fountain pens, curious pipes, and top hats, until at last he ended up fashioning whole steampunk people in fiction. Some of them can be found in his short story collection Ether Frolics, which was short-listed for the 16th annual Danuta Gleed Literary Award, recognizing the best début collection of short fiction by a Canadian author. He also wrote a couple of YA steampunk novels, Sporeville and Knights of the Sea. His website is at www.paulmarlowe.com

Oops, you forgot something.

The words you entered did not match the given text. Please try again.

Boy in The Clockwork House
by Lee Ann Farruga | 1 comment