Paul Marlowe is one of Steampunk Canada's oldest members and a very active one as well.  But he is also a writer, and a darn good one too!

Way back in the autumn of 2010, I received his most recent publication in The Wellborn Conspiracy series Knights of the Sea.  I reviewed it for the first online issue of The Dominion Dispatch.  Here is the review:

I wish I had read this author's previous book Sporeville before this one – that is the only negative thing I have to say about Knights of the Sea. The book is written and paced very like a play and indeed it would make a very good one.

Our young main characters, Elliott Graven and Paisley DeLoup are enjoyable and most likeable. Mr. Marlowe has done a fantastic job of fleshing them out so that you really get involved in their story. You find yourself fearing for their safety and cheering them on at various points in the plot. As well, all the secondary, and even very minor, characters are unique, odd and extremely entertaining.

The story rolls along quite smoothly and quickly from our introduction to Elliott on the Halifax Express in chapter one and all through his near death experiences. Paisley's half of the story includes her many encounters with Adelmo the German adventurer and her quest to learn more about her family's strange legacy. Add on all their bizarre adventures in the small town of Baddeck, Nova Scotia, mix in the author's array of historical facts from the period and you have quite the rollicking tale.

I highly recommend this as a fabulous piece of Canadian literature.

Well, after almost two years I finally got the chance to read the first book in the series, yes quite backward, but definitely worth the wait!

As I mentioned in my Knights of the Sea review, the only negative thing I had to say was that I wish I could have read Sporeville first.   I'm glad I finally got the opportunity. This time I read them in their appropriate order and it was well worth it!

The two main characters, Elliot and Paisley are just as much fun in the first book as the second and in Sporeville I finally got to meet their parents. They are only mentioned in Knights of the Sea. I absolutely fell in love with Paisley's parents. They actually ring very close to my husband and I and I laughed many times at their conversation and involvement in the story.

It was also nice to finally get the backstory for many references in the second book, such as finding out how Elliot acquired his cat Snigglers and how they got to be such close friends with Denis Ludlow. Reading Sporeville also gave me a greater understanding of just how nasty Professor Strange truly was and why they felt the need to stop his activities so badly.

Another part I quite enjoyed was the combination of how to drug an entire town and mesmerize them to do your bidding. I do hope there are no evil geniuses out there reading Sporeville... or maybe it's too late...

Sporeville is a wonderful introduction to The Wellborn Conspiracy series. Do be sure to get both books and, unlike me, read them in the correct order. It really does make it a much more enjoyable experience.

The author plans a third volume of The Wellborn Conspiracy series that will more or less conclude it, and which will draw together the activities of the eugenicist villains with the alternate history / parallel world hinted at in the prologue of Knights of the Sea ("Under the Metropolis of London. Sort of."). It will also involve the Athenian League, which Paisley was being invited to join in book two.  We will most definitely keep everyone up to date and let you know when it is released.

As well, Knights of the Sea overlaps a bit with a series of short stories the author has been writing about the Etheric Explorers Club, with the club founder Rafe Maddox joining the fun in Halifax & Baddeck. He is working on a collection of Etheric Explorers Club stories that will hopefully be in print later this year. It will include "A Visit from Prospero", a story first published in an Australian magazine a number of years ago (well before Knights of the Sea). The short story might be considered a sort of foretale of Knights of the Sea, since it deals with Maddox visiting Sable Island, NS, back around the time when Paisley and Elliott were born. Maddox brought a machine of his own invention to the remote island in order to attempt to summon up the ghost of his sister from the ether.

SO quite a bit to enjoy now and look forward to as well.  We'll keep you posted! 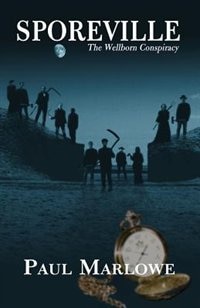