The Vampire Empire is a blend of the steampunk and vampire genres. The series reminds me of a fine wine. It has aged beautifully. Each story has been better than the last (I reviewed the other two in the series - The Greyfriar (pg 8 ) and The Rift Walker (pg 9) - in The Dominion Dispatch). The Kingmakers is most definitely the best of them all.

It is going to be truly difficult not to give any of the plot away as all the many threads throughout this tale are finally woven together, snipped and displayed for all to see. I CAN say that there are deceptions, laughter, tears, conspiracies, magic, grand battles and cats, lots and lots of cats.

Perhaps it is the fact that the two authors are married and work well together on a daily basis  that accounts for both main characters, Gareth and Adele, being well portrayed as equals. He in strength and her in wits. However, while Gareth is a strong figure from the beginning, being older (much older) and a vampire, watching Adele grow into her strength and becoming more powerful than Gareth (a little teaser for you...) has been a real treat.

As well, there has been a progression from one on one political backstabbing to more open warfare. A great way to get more secondary characters involved in this final chapter and see them shine. In particular, my favourite is General Anhalt. I think everyone needs such a fine gentleman in their life. He is a true gem.

If I continue, I am sure to slip up and blather on...Oh and wait until you see so and so do this... and I can't believe she did that.... you get the picture. So I will end my review here by saying that if you like magic, vampires, steampunk, battles,strong characters and cats, you will most definitely not be disappointed with this fantastic finale to The Vampire Empire!

The Kingmakers release date is September 4, 2012.  You can find it at amazon.ca 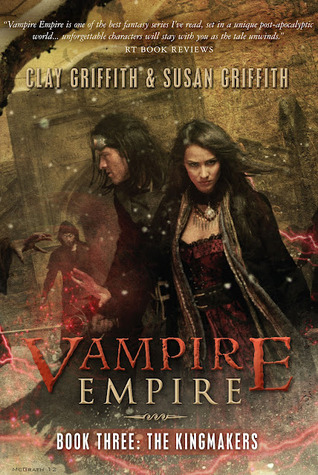