Nimue Brown is a fabulous and talented writer.  Tom Brown is an amazing and talented artist.  Put these two together and everything they create leaves one speechless.

While I and the family were in the UK, we had the wonderful opportunity to visit with them.  As we were chatting, the term "steampunk druid" was spoken in passing and somewhat in jest.  I love the idea of  steampunk druids and it has been in the back of my mind since our return. Recently, I asked Nimue to give me her thoughts and ideas of how steampunk druids would come about. Tom then surprised me this very day with his concept of what a Steampunk Druid would look like.

You can find both below.  Be prepared.  This is going to be the beginning of something very special...and possibly very silly!

I have been an active Druid for rather a lot of years now (so active I write books and articles about it.) I came into Steampunk by accident, having got involved with a comics project (Hopeless Maine) that other people started describing ashaving a Steampunk quality. I’ve been finding out what that meansover the last couple of years, and the more I see, the more I like.

One of the things I have noticed is the way in which Steampunks bring other sources of passion and enthusiasm into their Steampunkery. The gothic influences, Lovecraft, Dr  Who,and Star Wars, can all be steamed-over. Even actual Victorian stuff!  From the outside it looks like a glorious, mad blend of speculative influences, with added goggles. The more I have poked around though, the more I have seen the undercurrents of playful subversion, and the political and radical aspects of that playfulness. Steampunk is evidently not just a weekend diversion, it is a subtle and complex plan to recreate the world in a much more interesting and enlightened way. With more tea. I want in.

The Steampunk community does not suffer from a shortage of authors, and even my passable knowledge of period literature isn’t anything to get excited about. What Steampunk does not have, is Steampunk Druids. Which is curious because there are plenty of real-life Druids who are also into Steampunk in a big way. There is just nothing organised. No Tea Army equivalent. Yet.

At this point we need to pause and make a detour through what period Druidry looked like. Speaking as a modern Druid, Victorian Druidry is an embarrassing thing that many of us rather wish did not quite look the way it does. My Druid self is decidedly face-palm about the whole, sorry business. My Steampunk self is cackling like a mad thing, because this is so damn funny, and just begging to be played with.

The actual history of revival Druidry in the 19th century is long and complicated. If you want a big book that does it in detail, you need Ronald Hutton’s Blood and Mistletoe, which I am drawing on here, and poised to mangle. (Forgive me Ronald, it’s for a good cause!) Revival Druidry goes back way before then, as well, to the roots of antiquarianism, and debates from the 1700s about who built Stonehenge. (The Romans? The wizard Merlin? The Vikings? Some Biblical figure?) When it was pinned on the Druids, the mysterious priesthood of the Celts, people then started trying to tie the Druids to Pythagoras, assorted Biblical figures, proto-Christianity and all kinds of wild invention. Writing history books used to be a much more inventive sort of process. Blood and Mistletoe also covers what we know about the original ancient Celtic Druids, which can be brought down to two words: Not much.

The nineteenth century was the period of friendly societies, secret societies and the such. It is when the Freemasons really got going. There was The Ancient Order of Foresters (not ancient at all) and countless others. In the days before the welfare state, before insurance policies and pension schemes, you joined a friendly society, you paid a subscription, and in hard times they looked after you and your family. Some of those outfits called themselves Druids, because Druids were fashionable. The Masons had their aprons and secret handshakes. The Druids fabricated themselves a few ‘ancient’ rituals, were mostly Christian, and were not averse to sticking on fake beards and donning white nightgowns in order to promenade through town. Everyone else was doing it, why not them? A lot of nineteenth century Druidry was not religious at all.

Dotted through it, however, were people who took the spiritual side a bit more seriously, who were interested in being important and who liked making up histories. It all gets a bit Monty Python at this point, as even more ancient and venerable Druid orders with even older histories and more exalted claims popped into existence. Silly titles were a must. You have to be an Archdruid at the very least. Not that the Celts had Archdruids, that is a title that owes everything to Archbishops, but who’s counting? Silly costumes were definitely on the agenda. Don’t fancy going out in public in a beard and nightdress? How about bright green undergarments covered in mystic symbols? (No, I’m not making this up). Can’t find the ancient manuscript that proves your pet theory about the ancient Celts? Write it yourself. (I’m not making that up either).

For all the silliness, there were also important things going on. The reclaiming of the Celts and Druids was part of a wider movement to separate Welsh, Irish and Scottish identities out from the smothering embrace of all things English. A lot of important cultural figures were involved in this work – poet W.B Yeats being a fine example. Blake was influenced by it, and Druids cop up all over the place serving all kinds of functions from perpetrators of gothic horror, to suppliers of scantily clad female subjects. Druidry, in all its many crazy and imagined forms, was very much a part of the nineteenth century.  It informed peace movements and cultural developments like the Welsh eistedfodds, language preservation, folklore research, and artistic endeavours.

Where now? Do I want to try for a revival-revival? I am a fiction writer by trade, I am good at making things up. So far many of you will only have my word for it that Ronald Hutton exists, much less that the madness I have described is genuine, period stuff. I could have made up the lot, which would be very much in keeping with the tradition. I could import my own vision of Druidry back into the nineteenth century, again, that would be in keeping with a revival-revival philosophy. I could use things historical to lampoon all that I find silly in my own, contemporary tradition. Yeah. That bit I am doing, actually.

What would a Secret Order of Steampunk Druids look like? Lots of stick-on beards, perhaps? Silly costumes? Crazy public rituals involving tea, mistletoe and people singing things from the sound track of The Wicker Man? Why not?

Amidst the scope for silliness, there is also room for something with more heart, more soul. Modern Druidry is all about the flow of inspiration. It is about creativity, community, social responsibility, honour… these are not at all at odds with what makes Steampunk tick. Doing both would be very easy. Pretending to be fake, pretending to be real… layering on the artifice (the more fashionable Victorians loved artifice) subverting, recreating. Druids don’t really need goggles or cogs, but, by Herne a nice cup of tea wouldn’t go amiss!

There is a Secret Order of Steampunk Druids. It is not very secret, just small. It is not even slightly orderly, but it should be ticking boxes for both Steampunk and Druid. If you want to join, you may need to invent your own complex initiation rite, but the gist of it goes, ‘oh look, I’m a Druid,and a Steampunk’. If you’d like to get involved but no nothing about the Druidry side beyond the above mangling of facts, do potter over to Druid Life where I do the serious side. I have written at length about the ancestors of Druidry, and how we construct them – and while that is overtly a Druid book, it has a whole chapter on fantasy ancestors – what is Steampunk if not the construction of a fantasy ancestry? I have also prodded the topic of how we become ancestors of the future, an issue at the heart of any desire for social transformation.

Oh, and the comic…Hopeless Maine... which does not have any Druids in it, but there is a witch, and there are a few demons… It will be on paper soon, too. 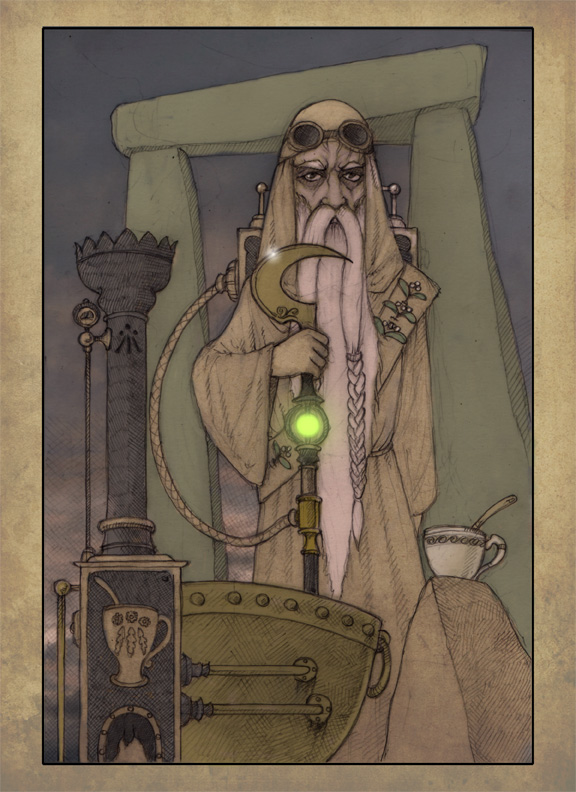