Canadian author Jordan Stratford is one half of the duo (along with his lovely wife Zandra) behind the Victoria Steam Exposition.  He is also the creator of the upcoming series Wollstonecraft , a Snicketesque girl-power adventure featuring Ada Lovelace and Mary Shelley at 11 and 14 in 1826 London.  His Kickstarter fundraiser for Wollstonecraft was hugely successful.

Due to its success, one of the items he has been able to check off his "to do" list is finish writing his steampunk novel Mechanicals based during the time of the Crimean War (1853).  It is most definitely an adventure story.  It is also full of intrigue, intellectual puzzles and even a demon!

One of the things I quite enjoyed about this book was the way the story centered around three groups of characters, instead of simply one or two main characters.  You have the mysterious, religious spies Avery, Celeste and Eleanor.  There is the well known gun dealer and businessman Samuel Colt and his new assistant Ernest Billings.  Finally, there is newly commissioned Captain George Blake and his batsman Corporal Landau.

Each chapter involves one group and what they are currently up to in the story.  As the tale of each group progresses, their travels and adventures take them closer and closer to the war, the climax of the story and each other.  The author does a brilliant job of seamlessly going from one tale to the next and blending them into one and the same in the finale.

I have only one complaint, and it is incredibly miniscule. My favourite characters were the ladies, who were both brilliant and well able to take care of themselves. I found their particular part of the story absolutely riveting and I had a very hard time not jumping past the poor gentlemen to see what would happen next with Celeste and Eleanor.

Another thing I quite liked about Mechanicals was that its historical, realistic and fictional elements were combined beautifully and the story reads swiftly, like being on a sailboat with a fine wind and calm seas.

I highly recommend Mechanicals.  It is a wonderful story with something for everyone.

You can purchase it for Kindle at amazon.com 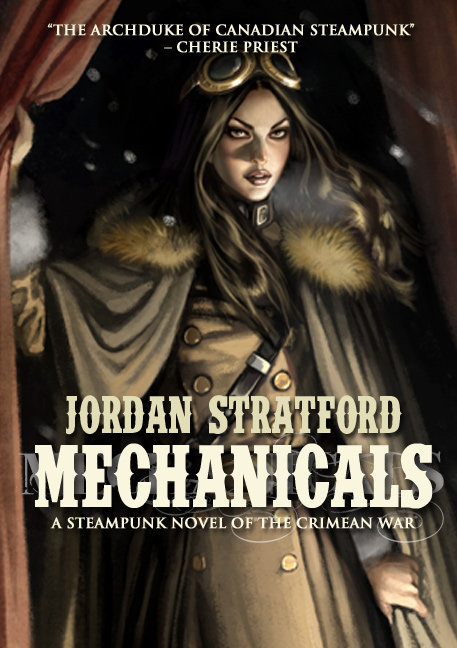