Yes, I Did Stick a Gear on It: The Illusion of Steampunk Performance 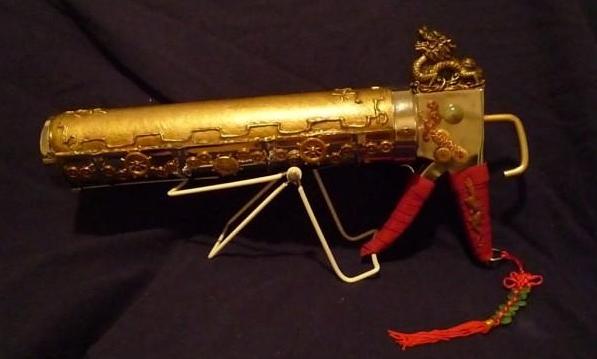 My Peacemaker was originally a chalking gun. I admit it. It's pretty obvious to anyone who looks at it for more than ten seconds. Sometimes, people think it was a cookie gun, and I don't mind that either. I like cookies.

There has been an unusual attitude, I've noticed, about the creation of steampunk props and the role of functional art. I've seen dismissive railing against “stick a gear on it” for physical artistic creations, the trumpeting of modded computers and iPods over spray-painted Nerf guns. I have no issue with beautiful functional art or people to have creative ambitions (and yes, that song based on the concept is pretty cute). But, as a performer with cosplayer roots, I never fully understood the ridicule. Because, a prop is a prop is a prop and as long as it helps you perform, whether the steampunk prop shoots real lightning or falls apart after being out in a rainstorm, as long as it enhances your artistic performance, it is a good steampunk prop. 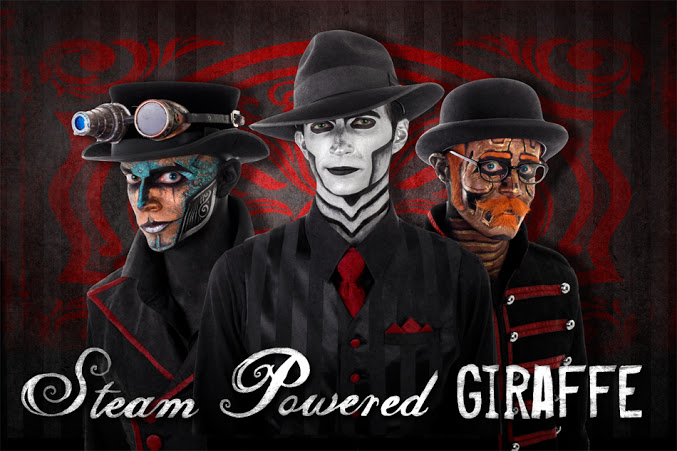 Steampunk performance falls into four different types. First, is the music. Defining what steampunk music is in a strictly musical stylistic sense will be opening a jar of worms. Mostly, steampunk music is a type of performance, because of the music genre's lack of technical commonalities. From Abney Park to Steam-Powered Giraffe to Eli August and the Abandoned Buildings and Two Gentleman Band to Veronique Chevalier and Vernian Process: steampunk music encompasses a variety of individual genre styles. What binds them all together, however, is their theatricality. How the music performs the fantasies of steampunk and the attitudes of the community who follows it is what defines a band's music as steampunk. This a significant switch from other taste subcultures rooted in music, like punk, metal, and goth movements, which had always been tied together through auditory stylings. Steampunk music is a visual styling that seems to transcend the auditory. The music performs – and succeeds – when the listener becomes transported into the musicians’ world in a combination of sound, dress, and action. 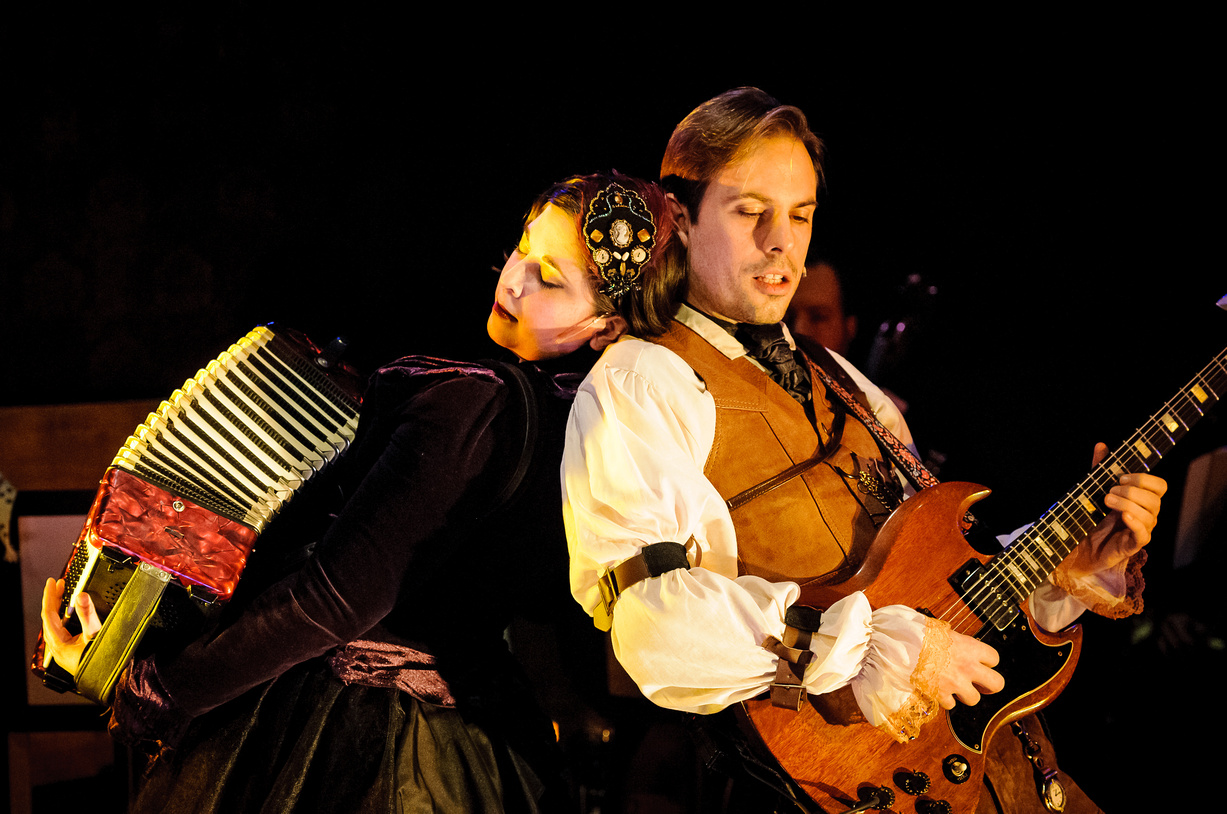 Another is the recognition of forms of 19th-century entertainments. Burlesque, belly-dance, vaudeville, sideshow performance, trapeze, cabaret shows: these are a few examples of artforms that have been popular in the steampunk community. Some artforms have been given a breath of new life and interest in light of steampunk's genre-blending abilities. Opera, especially its modern, avant-garde forms, have gotten a great boost in steampunk: Miranda, the steampunk murder mystery and the Dolls of New Albion, and the new production company Luminous Thread opening next month with Queen Victoria’s Floating garden of Secrets and Natural Wonders are a few examples.

We also have performance that takes place because of the modern technology: radio drama podcasts, interactive storytelling, webisode series, and transmedia storytelling, which engages the new and the old in a blend that bridges virtual reality and physical reality. Steampunk webseries have become a burgeoning form of DIY performance and entertainment.  And these projects expand beyond the stage and the screen in order to engage the viewer/participant on a whole new level. This has been a growing trend in theater generally – take a look at smash-hit shows like Sleep No More, which leads audiences through a warehouse maze of surprises (and has been recommended by many steampunks!) Transmedia storytelling jumps between mediums in order to engage audiences whether they read, watch or listen. League of S.T.EA.M., Clockwork Watch, Dirigible Days, and Steampunk Holmes are a list of examples of artists expanding their platforms.

And finally, we have non-professional theater. LARPers. Cosplayers. Steamsonas. Everyone has their airship (or submarine) crew or military division. Steam and Cinders, a Boston-based LARP, has been running for six years so far. The cross-over between steampunk and anime is understandable, given the connections between fringe fan cultures and the fact that lots of different animes have steampunk elements to them. Historical re-enactors seem to be draw to steampunk as well; to quote an observation made by Eric Larson (aka Lord Bobbins of TeslaCon): “Steampunk is where re-enactors go during the off-season.” Even the most well-known steampunk creators have pseudonyms they “go by”: Datamancer, Dr. Grymm, and Jake von Slatt to name a few examples. 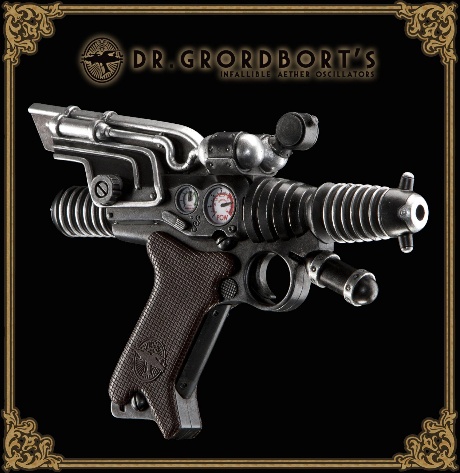 One of Dr. Grordbort’s rayguns

Most steampunk performance creates a believable illusion for your audience to play in (there could be exceptions to this of course, if you're a fan of Brecht.) From a theatrical standpoint, functional art is magnificent, but so is a non-functional prop weapon. The best example is the infamous Dr. Grordbort’s Rayguns created by the Weta Workshop, made from “Tremontium” which they describe as “compounds, when fused together under Earth's atmospheric conditions, take on a density and surface texture that is vaguely approximate to something called ‘ABS plastic.’” If your audience believes in that reality, then that is the important aspect, even if the gears do happen to be glued on. It all depends on engaging with your viewer's suspension of disbelief, or – more likely, in their sense of self-winking play that comes with the idea that we already know it’s an illusion (there, Brecht again!)

Yeah, the Peacemaker is a chalking-gun; I think that's part of its charm. Having props built out of unexpected items and lampshading them as such as part of the creativity of the humor. It's a tribute to my anime cosplay roots too – the art of replicating something like Edward Elric's automail arm or Hermione Granger's wand out with a bit of creativity, craft foam, and Model Magic. Half the time I spend with anime cosplayers is questioning what things were originally made from; that's the fun talk I have with many steampunks too.

What's the point of this theatrical run-down? A way to state the obvious: that performance is integral to steampunk and creating that imaginative play-space the creator wants to make is how we should assess quality too, and not just whether an item “really works.” The act of “stick a gear on it” is one of those gray areas that fall into two camps. In one sense, it isn't “performing steampunk properly” if one sees steampunk as being fully functional. On the other hand, maintaining the illusion is part of the enjoyment of steampunk. Can a steam-driven laptop be actually created? Probably, but I bet it would not be as effective as the netbook I'm typing on now. But it is fun to imagine that one could. And if the fun can actually put forth working ideas into reality, that's great too. But you can't snub the imaginative process that helps that technology get there.

As for the Peacemaker 2.0, plans have been developed. It'll have a backpack power source and some wiring connection and hopefully will have some light-up bits. It'll shoot off imperialist's heads and maybe fix your bathroom tile at the same time.

What's the big deal about that?

Ay-leen the Peacemaker (Diana M. Pho) is a fandom scholar, activist, blogger, and general rabble-rouser.  She has traveled the country as a professional convention speaker about social justice issues. Her academic published work can be found in Steampunk Magazine: Issues 1 – 7 (Combustion Books, 2011), Fashion Talks: Undressing the Power of Style (SUNY Press, 2012), and Steaming into a Victorian Future (Scarecrow Press, 2012). Ay-leen has been interviewed about steampunk and its evolving subculture for many media outlets, including BBC America, the Travel Channel, HGTV, and the Science Channel; the websites Airship Ambassador, Racialicious, and NerdCaliber; and the books The Steampunk Bible (Abrams Image, May 2011), Steampunk: Reloaded (Tachyon Publications, 2010), and The WisCon Chronicles Vol 5 (Aqueduct Press, 2010).

Ay-leen currently lives and works in New York City for Tor Books & blogs for Tor.com. You can follow her academic work on Academia.edu.