Multiculturalism in Steampunk: A Cosplay Approach

1820-1920 was a fascinating period. Advances in travel such as steam ships made it far easier than ever before for both trade goods and people to make their way around the globe. Colonialism marred the era with power dominated cultural exchanges, but for the first time widespread, rapid, global cultural exchange was occurring, including the exchange of ideas, clothing and textiles. This was also the time period of machine and technological advances, sometimes replacing traditional handcrafts, and other times offering new materials or techniques to enhance or expand traditional handicrafts. Throw in the even greater travel capabilities of commonplace airships (a staple in most steampunk) and it is easy to envision an alternate history in which trade outstripped colonialism as the main form of cultural exchange.

This presents an interesting opportunity for steampunk costuming. It can be approached as a member of any culture choosing to take in what they wish from the trade goods available to them and adapt it based on what is comfortable or interesting to them, or it can be approached as an outsider – a trader, a tourist, etc. - who is most comfortable with attire from their own culture but is delighted and intrigued by what they find on their travels (or they realize that their own garments don’t suit the climate of the country they are in, or have lost their own garb through accident or theft and need clothing). There were also many fashionable sub-eras during this time period that can serve as inspiration for potential style combinations. For instance, my Steampunk Geisha combines the esthetics of the traditional Kimono with the style of Art Nouveau, and was developed with the thought of 'What if the Geisha Houses had been brought to France during La Belle époque when Alphonse Mucha’s artwork was particularly in vogue?'. 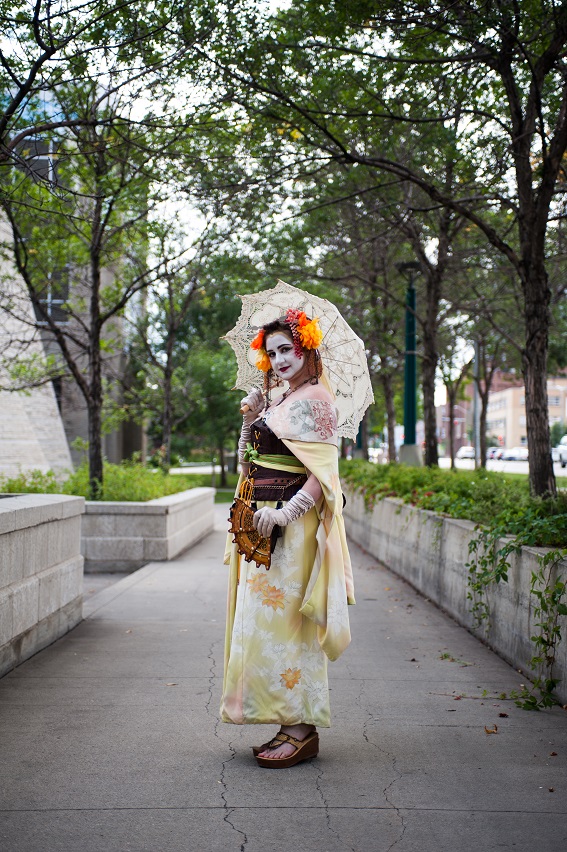 For inspiration for multi-cultural cosplays there are great historical examples of Victorian style gowns made out of Kimono silks in the 18th century (both in England and Japan), and a recent project which made traditional Japanese style Kimonos out of the bold printed cottons of Africa (Wafrica project). What other cultural garments or fabrics could be combined this way? Pinterest has some really interesting inspirations of traditional “ethnic” clothing and multicultural steampunk looks. Think outside of history to potential alternate histories – for instance what if Abyssinia (Ethiopia), Siam (Thailand) and Japan had formed an alliance (since all three were never colonized by the Europeans)? What steampunk personas or looks could this alliance have resulted in? Also look to alternate world building – the Aether Nomads project is a fascinating near and middle eastern inspired steampunk community that is worth checking out! Whether you go with inspiration from history or fiction make certain to have fun and craft something that matches your persona, comfort level and the needs of where you are wearing the piece (convention, photo-shoot, ball, etc.)

For the basics, a good place to start for any multi-cultural steampunk costume is looking at what a given culture was wearing in the time period that interests you. Beyond Victoriana has some great breakdowns by country that cosplayers may find helpful. Take Back Halloween is geared towards women and also has some great suggestions on potential inspirations, and where to find clothing, especially for those who don’t sew. After you have found your inspirational culture or cultures, put your mind to how such garments could be steampunked – either by adding steampunk elements (such as corsets worn outside the undergarment, utility belts, monocles, hostlers, googles, fans, pocket belts, hats, pocket watches, parasols, etc.) or mashing up elements of different cultures (e.g. a houndstooth printed sari, or a pirate/poet shirt worn with hakama). Based on the persona you are developing, what would your character wear? Why?

My Steampunk Ottoman Almeh outfit is made of a Turkish inspired Sirwal (harem pants), Yelek (under tunic) and entari (outer tunic or vest) worn with a leather steampunk vest. It has steampunk utility belts, leather gear and clock-hand hand flowers and a facial drape made out of clock-hands. A headpiece with traditional Turkomen jewelry pieces combined with a facial veil of clock hands is topped off with a silk scarf back drape. I wear a Tuareg necklace and Tuareg and Turkomen rings. Sometimes it is worn with swords or with steampunk tea cup holsters, other times I switch out the utility belts for a golden silk belt covered in traditional Turkomen jewelry. The outfit matches the persona of a very skilled dancer who travels through the Ottoman Empire, North Africa and Egypt (please note that the Ottoman Empire included the middle east during the Victorian Era, stretching from the borders of Russia into North Africa.) 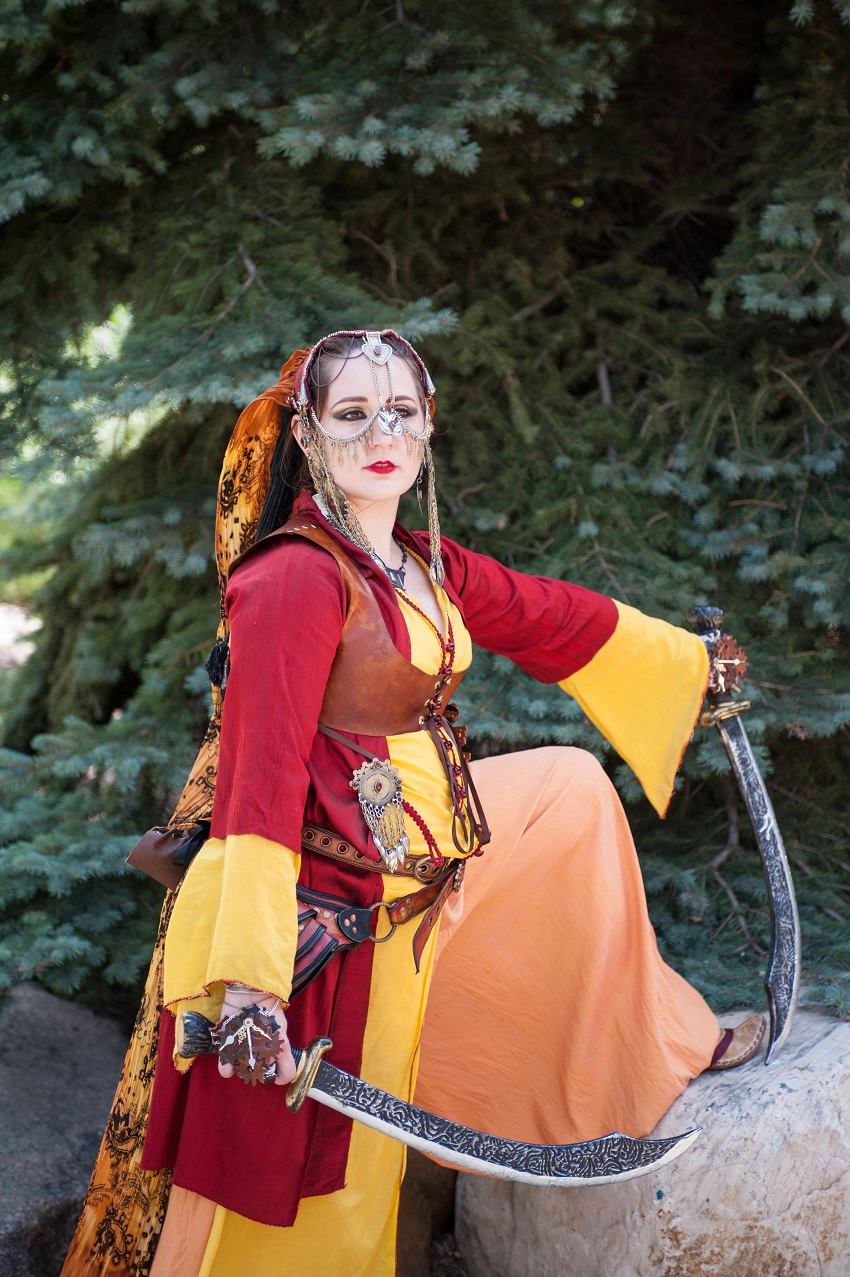 Keep an eye out for fabrics that represent the true historical era (for example such as those that were achieved through its technological innovations) and the concept of cultural exchange (not appropriation). Egyptian Assuit is a great example of this. While metal embroidery existed prior to its invention, the Bobbinet machine for making tulle was a key element in the development of the fabric which came to be known as Assuit or Tulle Bi-Telli (tulle with metal embroidery). The other key was the cultivation of Egyptian cotton, which is typified by stronger and finer threads than other types of cotton. Egyptian women took the resulting strong, fine, netted fabric and applied their metal embroidery to it in patterns specific to their culture creating a gorgeous material that is distinct to Egypt (from The Cloth of Egypt by Dawn Devine). Assuit became common in Egypt during the 1800’s and shawls made of this fabric became a major tourist item during the early 1900’s since the shawls were practical, gorgeous and easily packable.

For my Egyptian Steampunk cosplay, my friend Donna Cucheran combined a traditional style red assuit robe with four red assuit shawls and modern tulle to make a bustled robe/ dress. I have worn it twice, once combining it with a black and silver assuit head scarf and blue monocle (Edmonton’s 1st annual Steampunk Ball), and once combining it with a red fez/ pillbox type hat of my own making (silk and fosshape) and another red assuit shawl and the monocle (The 2nd Annual Steampunk Cruise)

Don’t overlook the potential in your own culture! I was born in and lived most of my life in Calgary, Alberta so a Western Canadian themed cosplay was a fun and fitting choice. I decided not to go with a western stereotype, such as a Saloon girl, and instead went with a bit of an original take coupled with recognizable Western elements. I wore boots, striped pants (for riding astride) under an ivory lace skirt that is shorter in the front than the back, a belt with two pouches, a camisole with a buckle-up front corset, a long linen duster coat (cut for a lady’s figure) with a steampunk vest, a black cowboy hat, a working wooden gear necklace and earrings set and steampunk vial holding wrist cuffs. I carried a lace fan in case I got hot at the con (worn for Edmonton Expo).

Imagination is the limit when it comes to multi-cultural based cosplay but I would strongly advise approaching it from a place of respect and research, and attempt to avoid appropriation. Give credit to the cultures that invented the garments/textiles you are using. Stay away from symbols such as actual Native American feather war bonnets/ feathers and real military service metals unless they were earned by you or are a family heirloom/part of your own cultural heritage. Do not incorporate consecrated religious items - my brother-in-law is an Orthodox Priest and I would never consider borrowing the crucifix that is part of his priestly regalia for a cosplay! If these items inspire you, craft your own variation (this might be a great place to do a steampunk version of the item) but leave the original out of your costume! Think about particularly troubling incidents in the history of interracial/intercultural relations – i.e. the history of blackface in cinema - and try to avoid repeating the insensitivities of earlier eras. Be inspired by history but don’t be a slave to the cultural norms of former times (i.e. white supremacy/white man’s burden). Watch out for stereotypes – do you know the difference between a Geisha and an Oiran? If not, please look it up before choosing to dress as a Geisha! If you favour military based cosplay try not to accidently dress and/or sound like a Nazi! Do your best not to reinforce negative cultural stereotypes while wearing your cosplay.

Most Halloween store costumes are not appropriate for incorporation into multi-cultural steampunk costuming as the Halloween version of the “Geisha”, “Chinese Dragon Lady”, “Mexican” etc. are not only poor imitations of the cultural garments they are meant to portray (cheap, poor fabrication, will wear out quickly), they are often insulting/degrading versions of the cultural clothing and/or made to be overtly  “sexy”/“slutty” for current Western standards. The real ideal of beauty in various cultures and time periods was often quite different than today’s so in addition to being disrespectful, using these costume elements diminishes the potential of how awesome your multi-cultural steampunk costume could look. A true multi-cultural cosplay needs some cultural and/or historical authenticity to work or it will not convey the image you are trying to achieve as it will reflect neither history nor the cultures that inspire you.

EBay is a good source for multi-cultural textile/clothing pieces if you know them by their correct name (furisode instead of Kimono, for instance) as are second-hand clothing shops, particularly the ones located near the most multi-cultural or immigrant dense portions of a city (sari’s can be particularly nice finds in second-hand shops near Indian communities). Folkwear Patterns can be helpful to those who sew, and don’t forget to check out conventions, both anime and comic. You can often find helpful items for steampunking an outfit (utility belt, parasol and fan hostler, etc.) or cultural garments at them, as well as inspiration from other cosplayers. YouTube is a wonderful resource for instructional videos – how to put on a Sari, tie an obi, etc., and don’t forget the cultural associations, student group associations etc. near you. If you approach them respectfully with an interest in learning how the garments are correctly worn, you will likely find someone willing to help you or point you towards helpful resources ( keep in mind you can always steampunk them after you know how and why they are worn in the first place).

Finally, Multicultural Steampunk is great if you travel a lot as the garments pack flatter than Victorian English garb, and may have originally been made to suit the climate of the environment you are traveling to. It's also great if you don’t want to wear a corset, or if your imagination takes you beyond the bounds of Victorian London!