A REVIEW, AN INTERVIEW AND A LITTLE SOMETHING SPECIAL !

Where to begin?? Let's begin at the end. Yes, it's the end. The last story of Deryn (Dylan) Sharp and Prince Aleksandar of Hohenberg. The last of so many incredible creatures and machines. The last of their adventures.

I'm quite overwhelmed! I may have to sit down...

Ahem....alright, now that I have recovered sufficiently let's continue...

Goliath begins right where Behemoth ended, with all of our favourite characters on the Leviathan heading off toward their destiny. There is quite a bit of travel in this third book. Their journey takes them to Siberia, Japan, Mexico and both the east and west coasts of the United States. Each part of their trip around the globe brings a different nail biting situation. I found myself on the edge of my seat a number of times.

The tension and thrill of their travels can be seen once again in KeithThompson's art. His imagination and illustrations bring the scenes to life. The detail of each character's facial expression or creature's ferocity is exquisite. The larger pieces of scenery skillfully take us along the journey with the Leviathan and all aboard.

Speaking of scenery, with each new location we are introduced to different historical figures. Scott Westerfeld has done a LOT of research and very well done indeed. This book is practically flooded with famous inventors, leaders and businessmen. Goliath would make a fun and fabulous introduction to a history class. Actually the whole series should become required reading as far as I'm concerned!

In addition to all of the excitement and historical who's who, the character development in Goliath is brilliant. In this finale to the series, Deryn has the worst time of it, but remains strong and true to herself. Throughout the story Alek doesn't fair much better, even though he is treated more like the prince he is by those in power. It takes a lot of courage and strong will to keep them going through every hazard they encounter. All I can say is thank goodness for good friends.

So who am I going to miss the most? Why the perspicacious lorises of course!

I was able to ask Scott Westerfeld a few questions about the end of this grand adventure. Here is what he had to say:

To answer all your questions correctly.

3. What is your favourite colour?

4. What is the capital of Assyria?

5. What is the air speed velocity of an unladen swallow?

That depends on if you mean Taillow or Swellow.

OK,that was just a bit of fun, now for the questions about the book series:

1. How do you feel now that the series is done?

I'm always relieved when series are done. It's like sending a kid off to college; they're not your problem any more. Maybe in a few years you'll start to miss them, but at the moment you're just happy they made it this far.

2. Have you enjoyed writing a steampunk series?

Steampunk is a great place to look at the collision of old and new. You have the new dominance of the machine, but also the old-fashioned manners and social strictures of the 19th century. Having these two forces bump into each other leads to a lot of great conflicts, like how does a girl pretend to be a boy so that she can serve on a living airship? Steampunk manages to exaggerate the issues of this era by making the technology even more fantastical.

3. Who was your favourite character? Why?

Dr. Barlow and Count Volger were always the most fun to write, because they're both schemers and think they're smarter than everyone else. And they are pretty darn smart, but not always. So scenes with them always have a measure of menace and comedy at the same time,which is a great combination.

4. Who/what was your favourite creature/machine? Why?

The Leviathan is wonderful, because it's so rich and complex, like the idea of evolution itself. Bovril was perhaps more useful as a writer, though, because it could say anything I wanted to say as a writer, and none of the characters ever paid attention. It was sort of like addressing the reader directly, but in a sneaky way.

5. Do you plan to write any steampunk stories in the future?

I like steampunk a lot, but I have no plans at the moment. I think any steampunk I write in the near future will feel like it's in the Leviathan world, even if it's not, and will suffer by the comparison. Of course, maybe I can do a spin-off of some kind.

As a Special Bonus Simon and Schuster Canada and Steampunk Canada are giving one lucky winner the whole set of books – Leviathan, Behemoth and Goliath !!

All you have to do is answer our skill testing question and I will pick the winner from everyone who answers correctly.

What is the name of Deryn and Alek's loris?

For more information on all three books go to Simon and Schuster Canada. 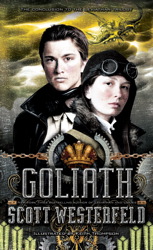