We are very lucky to have Michel R. Vaillancourt as a Steampunk Canada member.  Why, you may ask?  Well, because he is creative, a fine gentleman and he has written a brilliant story - The Sauder Diaries: By Any Other Name.

The story begins with engineering student Hans Sauder being captured from a mercahant ship by the airship pirates of the Bloody Rose. The story ends with a new man. The book is very much about perceptions, opportunity and making the most of what life throws at you.  All aboard a very fine steampunk airship.

The characters are well portrayed.  My favourite is a huge bulk of man, a type of Frankenstein's monster, named Blauchuk.  Life has dealt him a nasty hand and he plays it well.  Also, men and women aboard the Bloody Rose are truly equal.  The two most important women in the story, Arietta and Annika, are incredibly strong, both physically and mentally, and both have many lessons to teach Hans.

The story has everything you could ask for, travel, fine conversation, food, fighting, dragons, carousing, and lots of machinery.  It is a well rounded tale that is a great escape from the everyday.

While I was in the midst of reading his novel, Michel R. Vaillancourt was good enough to answer a few questions for me about himself and his work:

I started writing after I started reading, I guess would be the best way of explaining. My mom first got me "Dragon Riders of Pern" as a gift and that pretty much changed my world. Both Anne MccAffery and Robert Heinlein are my literary heroes. They literally changed my world and got me writing.

My Dad encouraged me to read some of Jules Verne's stuff as well as Arthur Conan Doyle when I was a pre-teen. The Victorian era and Victorian Science-Fiction have been pretty powerful literary settings for me for a long time. Then a friend convinced me to go to Steamcon with her, and the visual aesthetic was stunning ... I was hooked.

How did you come up with the idea of writing Hans' diary as a pirate?

Well, it's a "Coronet Blue" opening; the main character knows little more than the reader. As such, I needed some immediate connection with the reader that would make them feel at least like they had good company in being a bit unsure of the world and the people they are meeting. The diary entry followed by a "neutral camera perspective" of what happened seemed a good way to do that. The idea of using a diary as a legal defense isn't new. In fact the opening paragraph or two is a paraphrasing of the defense a German WW2 general used at Nuremberg. He kept accounts of everything that went on and how he did his best to avoid doing anything that was a war crime, regardless of his orders. When he went on trial, he read his diary as his defense.  In the end, he was found not guilty.

Do you have any future plans for further stories, whether Hans' or otherwise?

Yes, I do. I am hoping that there will be enough fan support to warrant at least a third book in the Sauder Diaries series. As well, I'm planning on doing another Steampunk novel tentatively titled "Africa By Airship". I'm also hoping to do an SF piece called "Marshal Station: Bushpilots of Mars" in a year or so.

You can find out more about Michel R. Vaillancourt and The Sauder Diaries at his website michelrvaillancourt.com

You can purchase The Sauder Diaries at Amazon and Barnes & Noble. 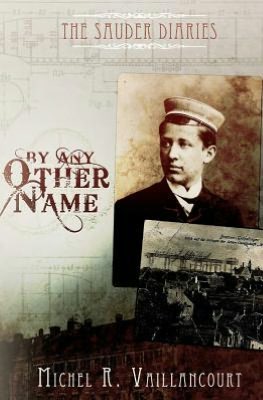