Steampunking your Fandom, for Artists and Cosplayers

When wanting to create either an art piece or cosplay of an existing character but with a steampunk twist, where does one start?

Steampunk costuming can be thought of as visual storytelling, with each element reflecting your character’s persona, their world, and the part they are playing in it. When working with a recognized character from an established fandom (e.g. Dr. Who, Star Wars, the Marvel Universe, etc.), the challenge is to create a twist on the character that honours their original story while placing them in a recognizably steampunk context.

The best place to start is with the character’s persona and back story. Peter Parker/ Spider Man is often depicted as young, poor, and working as a freelance photographer while attending school. His abilities are based off of those found in spiders (strength, agility, “spidey-sense”, etc.) and were obtained through a spider bite. Sometimes he is also depicted as having a lot of scientific knowledge and capability (i.e. inventing his web shooters on a very limited budget). Tony Stark/ Iron Man is usually depicted as very wealthy, with a large ego, a drinking problem and some type of heart issue. His abilities are based solely off what he can invent. Even if both characters are given a steampunk twist these characteristics remain part of who they are, so use them to your advantage. How would a steampunk Tony Stark use inventions to deal with a heart issue/ power his suit? Alternatively, what in a steampunk universe could have led to a heart issue in the first place? For Spiderman, what kind of experiment in a steampunk universe could have led to the spider abilities being transmitted to Peter? What photography related challenges would he face, and how could steampunk technology help him? 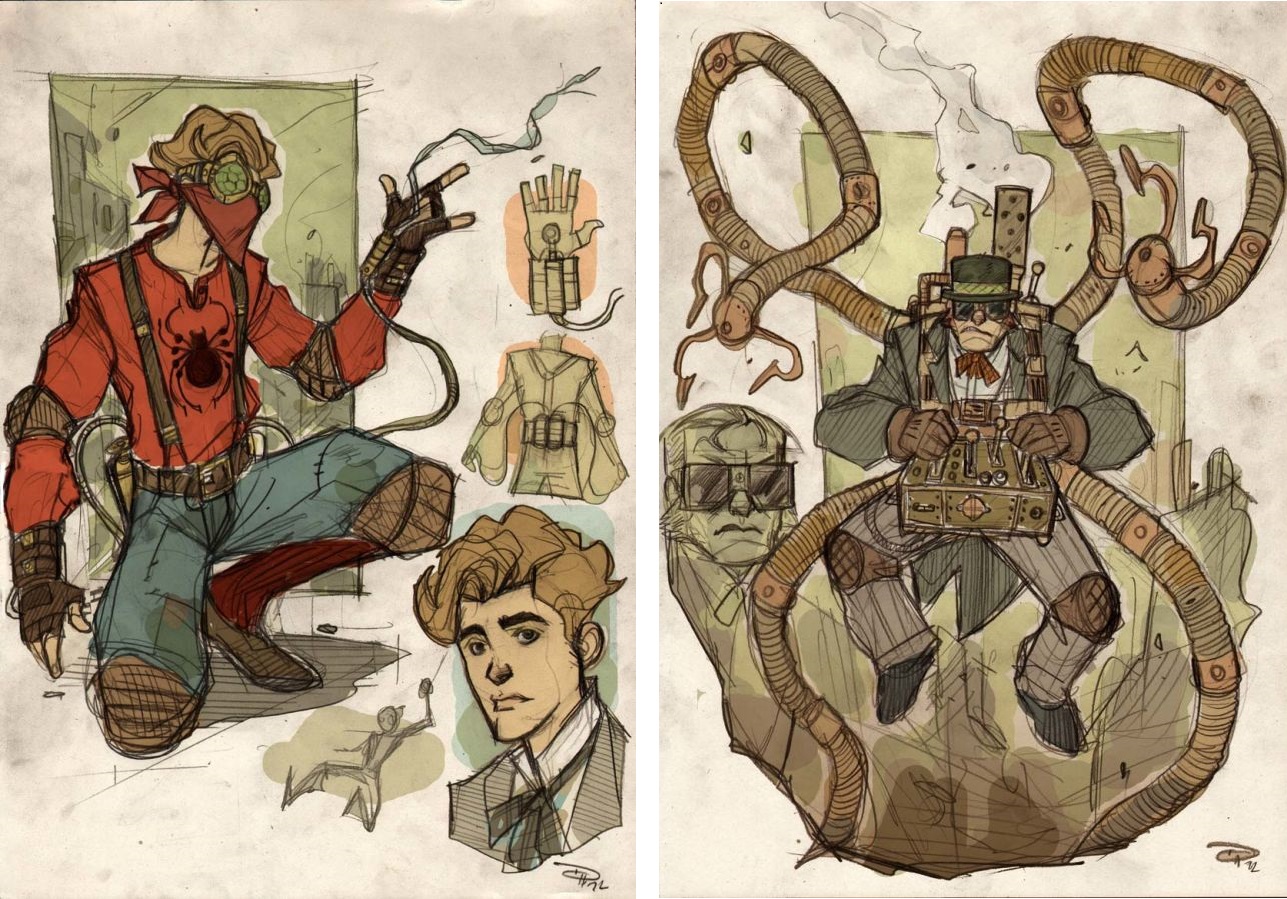 List the key or iconic aspects of your character, those things that, no matter how the character may change through different games in a series, different movies or different seasons of a show, let you recognize the character for who they are. Silhouette, signature colour schemes, symbols or insignia, iconic props or clothing pieces (i.e. a fez), signature hairstyles, and careers (i.e. reporter) are often markers that identify a character, even if their form changes. Mario from Mario brothers is a plumber with red overalls, a hat and a moustache. If you kept the plumber occupation, overalls, hat and a moustache you could change his colour scheme and hat type and he would still be very recognizable. A Storm Trooper from Star Wars has a specific helmet and armour shape. If you kept the shapes the same you could change the colours and the materials of the armour and the character is still recognizable as a Storm Trooper. Sailor Moon has a signature hair style, colour scheme and overall uniform style, so keeping a few of these aspects, like the hairstyle and colour scheme, opens up the uniform style to a steampunk influenced alteration without losing character recognition.

Once you have a feel for your character’s persona and signature elements, to steampunk it you will need to incorporate aspects belonging to the steampunk genre. Replacing modern metals and plastics with brass, copper, gold, silver and wood is often a good start, as is leaving any mechanical elements exposed so you can see the working parts. In Steampunk, that which is beautiful is usually functional, and what is functional, usually beautiful (even if in a very industrial sense) so try to incorporate both beauty and functionality into your design. Certain garments have gained status as culturally recognized Steampunk/ Victorian era wear. Examples of such clothing include: corsets, gartered stockings, bloomers, boots, bowler hats, top hats, Victorian era military uniforms, opera capes, utility belts, neck cloths, monocles, gloves, pocket watches, fans and parasols. Since these are so easily identified as such, use of these clothing items now serves as a kind of shorthand indicator that this is a either a steampunk (or possibly a historical re-enactment) costume, especially if there are multiple pieces from this list incorporated in the costume. Clever use of steampunk symbols such as gears, clock hands and goggles are also excellent for conveying the genre, but if overused they run the risk of turning into the “glue some gears on it” stereotype. Mechanical exo-limbs or suits made to match Victorian Science Fiction technology can be very effective and add a stunning visual centerpiece to your look, but must be used with care – since they are so eye-catching they can dominate an outfit very quickly and they may limit your mobility more than you would like.

Using just Victorian London as your style inspiration is too limiting so remember to think about the entire world for inspirations when planning your steampunk twist. Multicultural characters such as Black Panther, Silver Samurai, Storm, Wolverine, Wonder Woman, etc. lend themselves particularly well to this kind of approach. Also, don’t limit yourself to the character’s original culture if their backstory permits more variety for steampunking potential (e.g. what would Wolverine look like if he had travelled to a steampunk Meiji era Japan after leaving the Dominion of Canada?)

As mentioned earlier, your chosen character’s persona works to your advantage by helping guide your choices of what steampunk elements (or which versions of steampunk elements) to add. Fabric choice, for instance, will come strongly into play, with wealthier characters, or characters from certain cultures, being more likely to wear clothing made from silks while other characters are more likely to wear leather or rough canvass type cottons (Tony Stark verses Peter Parker, Princess Zelda verses Mario). Bowler hats have a working class (police, dock worker, soldier, plumbers, etc.) feel while top hats suit more aristocratic characters, magicians, etc. Goggles suit characters who regularly travel on fast forms of transportation (airships, mechanical wagons, mechanical animals, etc.), characters who are often around machines or chemicals that could be hazardous to the eyes or characters who need to obscure their identity or protect themselves in combat (superheroes). Parasols and umbrellas lend themselves particularly well to some characters (i.e. the Penguin) but not others (i.e. Batman).

Brian Kesinger’s Victoria and Otto steampunk series includes a Dorothy from Wizard of Oz inspired piece that is an excellent example of steampunking a fandom character without relying on gears or mechanical elements. In his piece, Victoria is shown wearing red ruby boots instead of slippers and a blue and white checked dress with a more steampunk silhouette than the one in the movie. She is wearing a utility belt around her waist with a pocket watch dangling from it, her teal coloured hair is up in a Victorian style hairdo and she has a set of goggles perched there. The image shows her carrying a top hat in one hand while in the other she is carrying a basket holding her pet octopus Otto instead of Toto. As a final touch she is depicted standing on the Yellow Brick road with the Emerald City in the background. This piece has a great balance between the iconic movie elements and the classic steampunk elements, and demonstrates that there is no need for a character to be shown wearing a visible corset in order for the outfit to be recognizably steampunk. 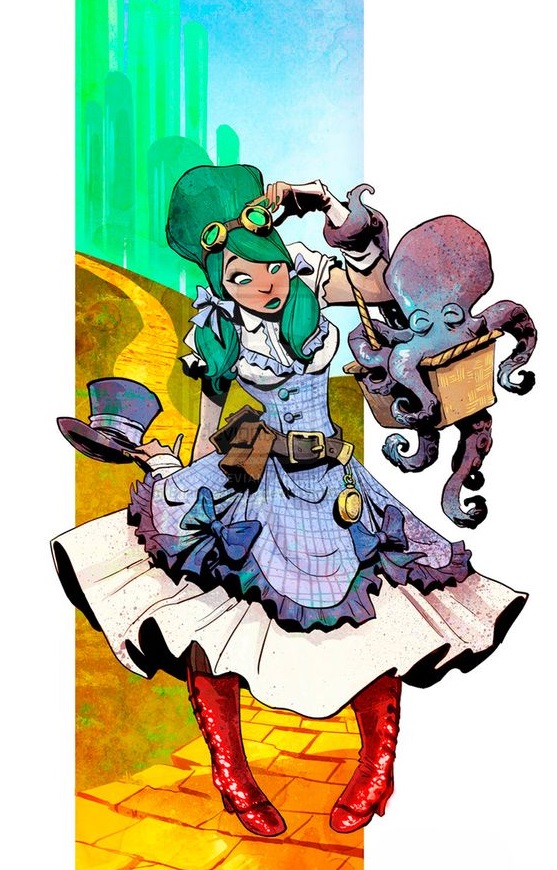 Please note that steampunking a character, especially a female character, does not necessarily mean making the character more “sexy”, although dress can be inspired by history without having to adhere to it (i.e. uncovered shoulders and ankles/ knees do not necessarily indicate a lady of ill repute). Steampunk also does not require use of the popular “Saloon girl” silhouette (corset, cut high in-front and low in-back bustle type skirt, fishnets, boots) as the base outfit inspiration, although this can be done, and done in a very classy way! Noflutter’s versions of the Sailor moon characters as well as Poison Ivy, Harley Quinn and Zatanna are good examples of this type of steampunk silhouette done in a fun and classy way.

For mechanized steampunk takes on characters, Dragonlocke has a particularly beautiful example of a Steampunk Samus art piece, and Matt Silva’s Steampunk Iron Man cosplay is quite stunning. Even though both approaches to a mechanized suit are very different, producing very different looking final results, in both cases the Victorian mechanical aesthetic is displayed to its best advantage while honouring the original character’s designs. If you search the internet or attend conventions you will quickly find that there are a lot of costumes and drawings of steampunk twists on characters, but don’t worry too much about whether or not yours is similar. If you want to be original, be brave and show the world your concept of what a steampunk version of your favourite character could look like! Alternatively, if you love an existing piece of artwork, be brave and take up the challenge of trying to recreate it in costume form. Most of all have fun!