Boy in The Clockwork Web

Author Nelson Boon (aka Steampunk Canada member Steam Bob), is a teacher who loves history, and in particular the Victorian era. In Steampunk, he says "I see a world where people are heros because they are dedicated to finding knowledge and truth, and they depend on their own intellects and ethical conduct to attain their goals." In his latest novel, he dedicates it to the children of the Industrial Revolution.

About this time last year, I had the pleasure to review the first in his series, The Boy in The Clockwork Cage.

His new book The Boy in the Clockwork Web continues the story a few years later. 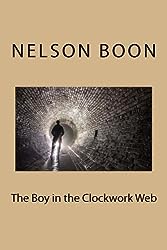 Alonzo is now a grown young man. He has become head mechanic and inventor for a thriving company. Gus too has found success and his place in a modest way, and both are quite happy. But then Alonzo finds Tommy. A polio stricken street urchin that he feels compelled to help.

He finds Tommy a place with Mrs. Browne who now works for a new family. Alonzo hopes Tommy can learn and become more than just another dirty street arab. But Tommy is not like Alonzo. He is much harder and calculating, and he is belligerent and cold.  Everything Alonzo never was. Even Mrs. Browne has an impossible task in winning him over.

But Alonzo has one more trick up his sleeve. In his spare time he's been working to resurrect the infamous device that he had once hoped would make him whole again. It's his last attempt to win over Tommy. But a sinister business man also has a great interest in his device, and when he finds the mad Dr. Cheyne, things turn very dangerous for Alonzo and Tommy.

Nelson Boon has created a wonderful continuation of Alonzo's story. He has added more dimensions to his Victorian vision, and the new characters fit in well. The story is a seamless natural continuation even though set a few years later.

I said it in my review of his first novel, and I'll say it again. I highly recommend this series. Nelson Boon has once again brought to life the gritty, hard side of Victorian life, with dashes of steampunk and hope.

Copyright Â©2010-2021 All rights reserved. For Information Purposes Only.